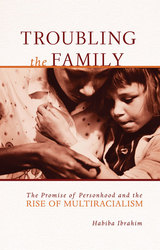 Troubling the Family argues that the emergence of multiracialism during the 1990s was determined by underlying and unacknowledged gender norms. Opening with a germinal moment for multiracialism—the seemingly massive and instantaneous popular appearance of Tiger Woods in 1997—Habiba Ibrahim examines how the shifting status of racial hero for both black and multiracial communities makes sense only by means of an account of masculinity.

Ibrahim looks across historical events and memoirs—beginning with the Loving v. Virginia case in 1967 when miscegenation laws were struck down—to reveal that gender was the starting point of an analytics that made categorical multiracialism, and multiracial politics, possible. Producing a genealogy of multiracialism’s gendered basis allows Ibrahim to focus on a range of stakeholders whose interests often ran against the grain of what the multiracial movement of the 1990s often privileged: the sanctity of the heteronormative family, the labor of child rearing, and more precise forms of racial tabulation—all of which, when taken together, could form the basis for creating so-called neutral personhood.

Ibrahim concludes with a consideration of Barack Obama as a representation of the resurrection of the assurance that multiracialism extended into the 2000s: a version of personhood with no memory of its own gendered legacy, and with no self-account of how it became so masculine that it can at once fill the position of political leader and the promise of the end of politics.

Habiba Ibrahim is assistant professor of English at the University of Washington.


Introduction: The Rising Son of Multiracialism

1. Multiracial Timelines: A Genealogy of Personhood

2. Legitimizing the Deviant Family: Loving vs. Virginia and the Moynihan Report

3. The Whiteness of Maternal Memoirs: Politicizing the Multiracial Child

4. Ambivalent Outcomes: Blackness and the Return of Racial Passing

Conclusion: Dreams of the Father and Potentials Lost