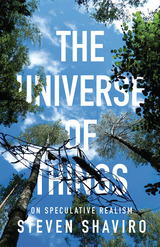 From the rediscovery of Alfred North Whitehead’s work to the rise of new materialist thought, including object-oriented ontology, there has been a rapid turn toward speculation in philosophy as a way of moving beyond solely human perceptions of nature and existence. Now Steven Shaviro maps this quickly emerging speculative realism, which is already dramatically influencing how we interpret reality and our place in a universe in which humans are not the measure of all things.

The Universe of Things explores the common insistence of speculative realism on a noncorrelationist thought: that things or objects exist apart from how our own human minds relate to and comprehend them. Shaviro focuses on how Whitehead both anticipates and offers challenges to prevailing speculative realist thought, moving between Whitehead’s own panpsychism, Harman’s object-oriented ontology, and the reductionist eliminativism of Quentin Meillassoux and Ray Brassier.

The stakes of this recent speculative realist thought—of the effort to develop new ways of grasping the world—are enormous as it becomes clear that our inherited assumptions are no longer adequate to describe, much less understand, the reality we experience around us. As Shaviro acknowledges, speculative realist thought has its dangers, but it also, like the best speculative fiction, holds the potential to liberate us from confining views of what is outside ourselves and, he believes, to reclaim aesthetics and beauty as a principle of life itself.

Bringing together a wide array of contemporary thought, and evenhandedly assessing its current debates, The Universe of Things is an invaluable guide to the evolution of speculative realism and the provocation of Alfred North Whitehead’s pathbreaking work.

Steven Shaviro is DeRoy Professor of English at Wayne State University. He is the author of several books, including Without Criteria: Kant, Whitehead, Deleuze, and Aesthetics and Connected, or What It Means to Live in the Network Society (Minnesota, 2003).

1. Self-Enjoyment and Concern
2. The Actual Volcano
3. The Universe of Things
4. Panpsychism and/or Eliminativism
5. Consequences of Panpsychism
6. Noncorrelational Thought
7. Aisthesis