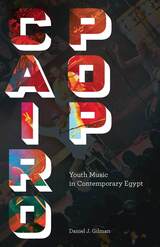 Cairo Pop is the first book to examine the dominant popular music of Egypt, shababiyya. Scorned or ignored by scholars and older Egyptians alike, shababiyya plays incessantly in Cairo, even while Egyptian youth joined in mass protests against their government, which eventually helped oust longtime Egyptian president Hosni Mubarak in early 2011. Living in Cairo at the time of the revolution, Daniel Gilman saw, and more importantly heard, the impact that popular music can have on culture and politics. Here he contributes a richly ethnographic analysis of the relationship between mass-mediated popular music, modernity, and nationalism in the Arab world.

Before Cairo Pop, most scholarship on the popular music of Egypt focused on musiqa al-ṭarab. Immensely popular in the 1950s and ’60s and even into the ’70s, musiqa al-ṭarab adheres to Arabic musical theory, with non-Western scales based on tunings of the strings of the ‘ud—the lute that features prominently, nearly ubiquitously, in Arabic music. However, today one in five Egyptians is between the ages of 15 and 24; half the population is under the age of 25. And shababiyya is their music of choice. By speaking informally with dozens of everyday young people in Cairo, Gilman comes to understand shababiyya as more than just a musical genre: sometimes it is for dancing or seduction, other times it propels social activism, at others it is simply sonic junk food.

In addition to providing a clear Egyptian musical history as well as a succinct modern political history of the nation, Cairo Pop elevates the aural and visual aesthetic of shababiyya—and its role in the lives of a nation’s youth.

1. “My Patience Is Short”: Youth Talk about Grandpa’s Music
2. “Oh, My Brown-skinned Darling”: Sex, Music, and Egyptian-ness
3. “The Hardest Thing to Say”: Taxonomies of Aesthetics
4. “A Poem Befitting of Her”: Ambiguity and Sincerity in Revolutionary Pop Culture

Epilogue: On the Counter-Revolution