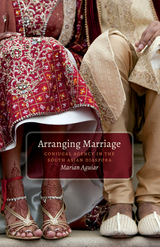 Arranged marriage is an institution of global fascination—an object of curiosity, revulsion, outrage, and even envy. Marian Aguiar provides the first sustained analysis of arranged marriage as a transnational cultural phenomenon, revealing how its meaning has been continuously reinvented within the South Asian diaspora of Britain, the United States, and Canada. Aguiar identifies and analyzes representations of arranged marriage in an interdisciplinary set of texts—from literary fiction and Bollywood films, to digital and print media, to contemporary law and policy on forced marriage.

Aguiar interprets depictions of South Asian arranged marriage to show we are in a moment of conjugal globalization, identifying how narratives about arranged marriage bear upon questions of consent, agency, state power, and national belonging. Aguiar argues that these discourses illuminate deep divisions in the processes of globalization constructed on a fault line between individualist and collectivist agency and in the process, critiques neoliberal celebrations of “culture as choice” that attempt to bridge that separation. Aguiar advocates situating arranged marriage discourses within their social and material contexts so as to see past reductive notions of culture and grasp the global forces mediating increasingly polarized visions of agency.

Marian Aguiar is associate professor of literary and cultural studies at Carnegie Mellon University. She is author of Tracking Modernity: India’s Railway and the Culture of Mobility (Minnesota, 2011).