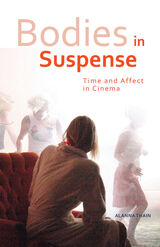 Bodies in Suspense presents a powerful new way to think through postdigital cinema and the affective turn in critical theory. According to Alanna Thain, suspense films allow us to experience the relation between two bodies: that of the film and that of the viewer. Through the “time machine” of suspense, film form, gender, genre, and spectatorship are revealed in innovative and different ways. These films not only engage us directly in ethical concerns, but also provide a key for understanding corporeal power in the digital era.

Offering a new framework for understanding cinematic suspense, Bodies in Suspense argues that the “body in time” enables us to experience the temporal dimension of the body directly. This is the first book to link two contemporary frames of analysis: questions of cinematic temporality and contemporary affect theory. Thain conducts close readings of influential suspense films by Alfred Hitchcock, David Lynch, Christian Marclay, Rian Johnson, and Lou Ye, and sets forth a compelling new theory of cinema, reading for the productivity of the “crime of time” that stages the duplicity of cinematic bodies. Through these films that foreground doubled characters and looping, Thain explores Gilles Deleuze’s claim that “the direct time-image is the phantom which has always haunted cinema.”

A vital new addition to film theory, corporeality and affect theory, feminist theory, and the philosophy of time—and one of the first books to explore David Lynch’s Hollywood trilogy—Bodies in Suspense asks us to pay attention, above all, to the ways in which the condition of spectatorship creates a doubling sensation with important philosophical repercussions.

Alanna Thain is associate professor of English and world cinemas, and director of the Institute for Gender, Sexuality, and Feminist Studies at McGill University.

Contents
Introduction: Time Crimes, or Feeling Difference Made
1. A Free Replay: Vertigo and the Spiral of Time
2. Into the Folds: David Lynch’s Hollywood Trilogy
3. Suzhou River and the Movement-Vision of Love
4. Time Takings: Suspended Reanimations and the Pulse of Postdigital Cinema
Conclusion: Affective Atmospherics and Living Time in Cinema
Acknowledgments
Notes
Index