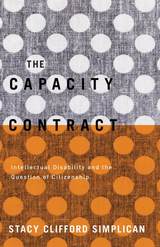 In the first sustained examination of disability through the lens of political theory, The Capacity Contract shows how the exclusion of disabled people has shaped democratic politics. Stacy Clifford Simplican demonstrates how disability buttresses systems of domination based on race, sex, and gender. She exposes how democratic theory and politics have long blocked from political citizenship anyone whose cognitive capacity falls below a threshold level⎯marginalization with real-world repercussions on the implementation of disability rights today.

Simplican’s compelling ethnographic analysis of the self-advocacy movement describes the obstacles it faces. From the outside, the movement must confront stiff budget cuts and dwindling memberships; internally, self-advocates must find ways to demand political standing without reinforcing entrenched stigma against people with profound cognitive disabilities. And yet Simplican’s investigation also offers democratic theorists and disability activists a more emancipatory vision of democracy as it relates to disability⎯one that focuses on enabling people to engage in public and spontaneous action to disrupt exclusion and stigma.
Taking seriously democratic promises of equality and inclusion, The Capacity Contract rejects conceptions of political citizenship that privilege cognitive capacity and, instead, centers such citizenship on action that is accessible to all people.

Stacy Clifford Simplican is a postdoctoral fellow at Michigan State University and the DOCTRID Research Institute, which focuses on improving the quality of life of people with intellectual disabilities.