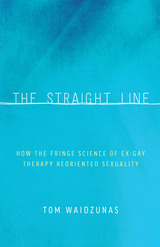 To be taken seriously, therapies that claim to “cure” homosexuality wrap themselves in lab coats. Even though the fit is bad, and such therapies and their theorists now inhabit the scientific fringe, the science of sexuality has made some adjustments, too, Tom Waidzunas tells us in this provocative work.

Intervening in the politics of sexuality and science, The Straight Line argues that scientific definitions of sexual orientation do not merely reflect the results of investigations into human nature, but rather emerge through a process of social negotiation between opposing groups. The demedicalization of homosexuality and the discrediting of reparative therapies, ex-gay ministries, and reorientation research have, Waidzunas contends, required scientists to enforce key boundaries around scientific expertise and research methods. Drawing on extensive participant observation at conferences for ex-gays, reorientation therapists, mainstream psychologists, and survivors of ex-gay therapy, as well as interviews with experts and activists, The Straight Line traces reorientation debates in the United States from the 1950s to the present, following homosexuality therapies from the mainstream to the margins. As the ex-gay movement has become increasingly transnational in recent years, Waidzunas turns to Uganda, where ideas about the scientific nature of homosexuality influenced the passage of the Anti-Homosexuality Act of 2014.

While most studies treat the ex-gay movement as a religious phenomenon, this book looks at how the movement, in its attempts to establish legitimacy, has engaged with scientific institutions, shaping virulent anti-gay public policy.

Tom Waidzunas is assistant professor of sociology at Temple University.