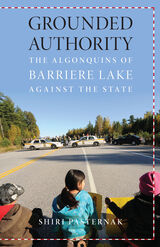 Since Justin Trudeau’s election in 2015, Canada has been hailed internationally as embarking on a truly progressive, post-postcolonial era—including an improved relationship between the state and its Indigenous peoples. Shiri Pasternak corrects this misconception, showing that colonialism is very much alive in Canada. From the perspective of Indigenous law and jurisdiction, she tells the story of the Algonquins of Barriere Lake, in western Quebec, and their tireless resistance to federal land claims policy.

Grounded Authority chronicles the band’s ongoing attempts to restore full governance over its lands and natural resources through an agreement signed by settler governments almost three decades ago—an agreement the state refuses to fully implement. Pasternak argues that the state’s aversion to recognizing Algonquin jurisdiction stems from its goal of perfecting its sovereignty by replacing the inherent jurisdiction of Indigenous peoples with its own, delegated authority. From police brutality and fabricated sexual abuse cases to an intervention into and overthrow of a customary government, Pasternak provides a compelling, richly detailed account of rarely documented coercive mechanisms employed to force Indigenous communities into compliance with federal policy.

A rigorous account of the incredible struggle fought by the Algonquins to maintain responsibility over their territory, Grounded Authority provides a powerful alternative model to one nation’s land claims policy and a vital contribution to current debates in the study of colonialism and Indigenous peoples in North America and globally.

Shiri Pasternak is assistant professor in the School for the Study of Canada at Trent University. She has held postdoctoral fellowships at the Osgoode Hall Law School at York University and at Columbia University’s Department of Middle Eastern, South Asian, and African Studies.

Contents
Preface: An Autobiography of Territory
Introduction
1. Flipping the Terms of Recognition: A Methodology
2. How Did Colonialism Fail to Dispossess?
3. Jurisdiction from the Ground Up: A Legal Order of Care
4. Property as a Technique of Jurisdiction: Traplines and Tenure
5. “They’re Clear-Cutting Our Way of Life”
6. The Trilateral Agreement is Born
7. Coup D’état in Fourth World Canada
8. The Government Must Fall
9. Security, Critical Infrastructure, and the Geography of Indigenous Lands
Conclusion: A Land Claim is Canada’s Claim: Against Extinguishment
Acknowledgments
Notes
Index