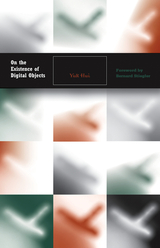 Digital objects, in their simplest form, are data. They are also a new kind of industrial object that pervades every aspect of our life today—as online videos, images, text files, e-mails, blog posts, Facebook events.Yet, despite their ubiquity, the nature of digital objects remains unclear.

On the Existence of Digital Objects conducts a philosophical examination of digital objects and their organizing schema by creating a dialogue between Martin Heidegger and Gilbert Simondon, which Yuk Hui contextualizes within the history of computing. How can digital objects be understood according to individualization and individuation? Hui pursues this question through the history of ontology and the study of markup languages and Web ontologies; he investigates the existential structure of digital objects within their systems and milieux. With this relational approach toward digital objects and technical systems, the book addresses alienation, described by Simondon as the consequence of mistakenly viewing technics in opposition to culture.

Interdisciplinary in philosophical and technical insights, with close readings of Husserl, Heidegger, and Simondon as well as the history of computing and the Web, Hui’s work develops an original, productive way of thinking about the data and metadata that increasingly define our world.

Yuk Hui is a postdoctoral researcher at the Institute of Culture and Aesthetics of Digital Media in Leuphana University in Germany.

Bernard Stiegler is head of the Institut de recherche et d’innovation of the Centre Pompidou.