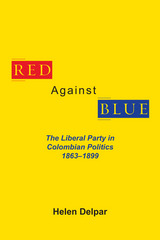 “Delpar provides a history of Colombia’s liberal party covering a period in which it was first the dominant party (1863-1885) and then the party of opposition (1886-1899). Delpar’s study is well written and firmly grounded in extensive research [and] will occupy a prominent position in the sparse historiography of the late 19th century Colombia.” – Hispanic American Historical Review (HAHR)
“Delpar has given us a book that is disarmingly unpretentious yet offers considerably more than the title implies. As a discussion of the Liberal Party during the latter part of the 19th century, it is more narrative and descriptive than theoretical and analytical, indeed quite free of both redundant conceptualization and overly self-conscious methodology.
“It pays due attention to historical origins, regional distribution of support the characteristics of Liberal leadership, Liberal doctrine such as it was, the rules of the political game under the constitution of 1863, and the Liberal’s adjustment to opposition status after their fall from power in the 1880s. The author’s tone is clear and she has used an impressive quantity of published sources plus the personal papers of a good number of prominent Liberals.
TABLE OF CONTENTS