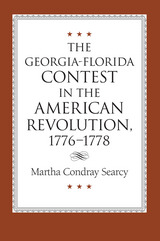 Almost from the time of Georgia’s settlement by Oglethorpe in 1733, both Georgians and Carolinians had made periodic unsuccessful attempts to conquer the Spanish Castillo San Marcos in St. Augustine; and during the American Revolution (in 1776, 1777, and 1778) the rebels tried without success to take the fortification, which was then a British stronghold. Each of the three expeditions was less successful than the preceding one, and between the formal campaigns vicious partisan warfare between loyalists and rebels devastated much of the area between the Altamaha and St. Johns rivers.

This book presents a detailed history of the three Georgia-Florida campaigns. Indecisive and lacking the glamour of either the contemporary campaigns in the North, or the later campaigns in the South, they appeared isolated from the mainstream of the revolutionary struggle. The rebels were handicapped by divided command, personal quarrels, difficult terrain, and miserable weather. While Searcy emphasizes the military aspects of the period, she also treats the conflict between civil and military authorities, the effects of war on the civilian populace, and the interaction of economic matters with military affairs. Her work clarifies the importance of these military activities in the subsequent British strategy in the occupation of Georgia and the Carolinas.

Martha Condray Searcy is Assistant Professor of History, The University of Alabama in Huntsville.