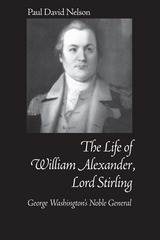 Nelson’s William Alexander, Lord Stirling, (1726-83) is the biographical account of a man who served 18th-century American society as a prominent citizen in peacetime and as a soldier in the Seven Years’ War and the American Revolution. At the beginning of the Revolutionary War Stirling was appointed a colonel in the New Jersey Continental Line and from there rose to the rank of Major General. A brave and loyal soldier, he greatly impressed General George Washington, who made him commander of one of the five divisions of the Continental Army. Serving in this capacity, Stirling made his reputation as a military man fighting in the battles of Long Island, White Plains, Trenton, Brandywine, Germantown, and Monmouth. He spent the winter of 1777-78 with Washington at Valley Forge. From time to time he carried out independent military operations, most notably a raid against Staten Island in January 1780. Stirling’s buoyant optimism and reckless enthusiasm for any task led one military comrade to state that his high birth and good humor provided him with many more opportunities in life than his skill and intelligence would have permitted. He died while in command of the Northern Department on January 15, 1783, full of military glory and, according to one cynic, “good liquor.”
AUTHOR BIOGRAPHY
Paul David Nelson is Professor of History, Berea College.