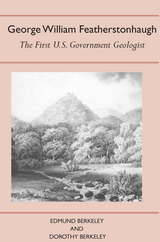 "U.S. historians can read this book with considerable profit for the details it offers; general readers can enjoy it as a straightforward and informative biography."
—Choice

"For anyone interested in the history of American geology, knowledge of G. W. Featherstonhaugh (1780-1866) is both essential and hard to obtain. He was the force behind the first railroad in America; a pioneer in scientific agriculture; an essayist, poet, and novelist; a lobbyist; a linguist; and a daring diplomat who saved the king and queen of France from certain death. [Yet] his strongest tie was with the geology. [This] biography is interesting, well researched and well written. It is a balanced study of a complex man who did so much work and generated such controversy."
—Earth Sciences History