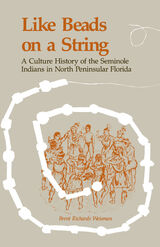 Florida's Seminole Indians are exerting an ever increasing influence on crucial issues in state politics, economy, and law. From a position of near obscurity less than a century ago, these Native Americans have staged a remarkable comeback to take an active hand in shaping Florida society, present and future. Anthropologists have long been fascinated with the Seminoles and have often remarked upon their ability to adapt to new circumstances while preserving the core features of their traditional culture. Early observers of the Seminoles also commented on the dynamic tension that existed for the individual, clan, and tribe, that drew them together, "like beads on a string," into a resilient and viable society. This study traces the emergence of these qualities in the late prehistoric and early historic period in the Southeast and demonstrates their influence on the course of Seminole culture history.