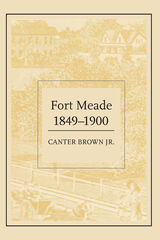 The oldest town in interior south Florida, Fort Meade lies about 50 miles east of Tampa and 10 miles south of Polk CountyÕs seat of Bartow. In this volume, Polk County native Canter Brown recounts the intriguing story of the founding and evolution of Fort Meade during the last half of the 19th century, when it was first established as a military outpost to separate Seminoles from white pioneer families desirous of cattle-grazing lands. A civilian community coalesced at Fort Meade under the pressures of the Billy Bowlegs War of 1855Ð58. Quickly the village developed as a cattle-industry center, which was important to the Confederacy until its destruction in 1864 by home-grown Union forces.
In the postwar era the cattle industry revived, and the community prospered. The railroads arrived in the 1880s, bringing new settlers, and the village grew into a town. Opportunities expanded as well with the growth of citrus, phosphate mining, truck farming, and tobacco industries. A boom-and-bust economy alternately bolstered and rocked the town, and the disastrous freezes of 1894Ð95 almost delivered a fatal blow.

Little has been written about town development on the Florida frontier. This book portrays the extremely complicated and often exciting processes and influences at play in interior south Florida, and the very precarious hold that town life possessed on that frontier.Local history the way it should be written. Canter Brown has managed to score several significant accomplishments in Fort Meade, 1849-1900. The book contributes to the growing body of good, solid monographs dealing with Florida state and local history and represents the building blocks necessary for a state and regional synthesis. The cumulative research compiled for this volume is impressive and daunting. Canter Brown proves that good local history requires considerable detective work and far-ranging inquiries.

Canter Brown, Jr., is Adjunct Instructor in the Department of History and Political Science at Florida A&M University.