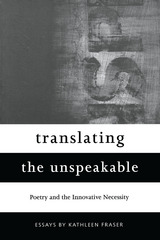 A prominent avant-garde poet charts both her personal artistic development and the difficulties faced by women writers pursuing innovative paths.

An accomplished and influential poet, Kathleen Fraser has been instrumental in drawing attention to other women poets working
outside the mainstream. Translating the Unspeakable gathers eighteen of her essays written over nearly twenty years, combining autobiography and criticism to examine what it means for any artist to innovate instead of following an already traveled path.

In autobiographical passages Fraser tells how her generation was influenced by revolutions in art and philosophy during the early 1960s and how she spent years pursuing idiosyncratic means of rediscovering the poem's terms. By the 1970s her evolving poetics were challenged by questions of gender, until immersion in feminist/modernist scholarship led her to initiate greater dialogue among experimentalist poets.

Other essays examine modernist women writers, their contemporary successors, and the visual poetics they have practiced. By exploring the work of such poets as H. D., Mina Loy, Lorine Niedecker, and Barbara Guest, Fraser conveys their struggle to establish a presence within accepted poetic conventions and describes the role experimentation plays in helping women overcome self-imposed silence.

All of Fraser's writings explore how the search to find one's own way of speaking into a very private yet historic space—of translating the unspeakable—drives poetic experimentation for women and men alike. This provocative book provides a glimpse into the thought processes of
the poetic mind, enhancing our understanding of innovative writing.

Kathleen Fraser, award-winning poet, prose writer, and editor/publisher of the journal HOW(ever) and the new on-line journal HOW2, was Professor of Creative Writing for twenty years at San Francisco State University, where she directed The Poetry Center and founded the American Poetry Archives. Her most recent book of poems is il cuore: the heart.