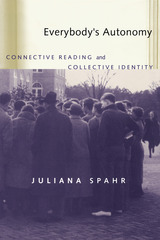 Experimental texts empower the reader by encouraging self-governing approaches to reading and by placing the reader on equal footing with the author. Everybody's Autonomy is about reading and identity.

Contemporary avant garde writing has often been overlooked by those who study literature and identity. Such writing has been perceived as unrelated, as disrespectful of subjectivity. But Everybody's Autonomy instead locates within avant garde literature models of identity that are communal, connective, and racially concerned. Everybody's Autonomy, as it tackles literary criticism's central question of what sort of selves do works create, looks at works that encourage connection, works that present and engage with large, public worlds that are in turn shared with readers. With this intent, it aligns the iconoclastic work of Gertrude Stein with foreign, immigrant Englishes and their accompanying subjectivities. It examines the critique of white individualism and privilege in the work of language writers Lyn Hejinian and Bruce Andrews. It looks at how Harryette Mullen mixes language writing's open text with the distinctivesness of African-American culture to propose a communal, yet still racially conscious identity. And it examines Theresa Hak Kyung Cha's use of broken English and French to unsettle readers' fluencies and assimilating comprehensions, to decolonize reading. Such works, the book argues, well represent and expand changing notions of the public, of everybody.
AUTHOR BIOGRAPHY

Juliana Spahr is assistant professor at the University of Hawaii, Manoa. She edits the journal Chain with Jena Osman.