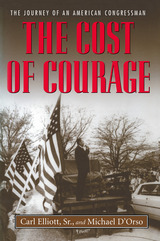 This deeply moving story chronicles the tenacity and vision that carried Carl Elliott from the hills of northwest Alabama to eight distinguished terms in the United States House of Representatives.

Born in a log cabin on a tenant farm in 1913, Carl Elliott worked his way through The University of Alabama during the Great Depression and was elected to Congress in 1948. With a no-nonsense philosophy of fairness and equal opportunity, he established himself as one of the most effective members of the House of Representatives during the 1950s. He was a progressive Democrat and he fought hard for the dirt farmers and coal miners he grew up with and who sent him to Congress.

In an era when racial segregationists dominated southern politics, Elliott worked with many of the important political leaders of the 20th century, including Presidents Truman, Eisenhower, and Kennedy and powerful House Speaker Sam Rayburn. He was instrumental in passing the National Defense Education Act of 1958, which continues to provide college loans to more than 20 million Americans. But his brave stand against racism and George Wallace in the 1966 Alabama gubernatorial race ruined him professionally (he never returned to elected office) and financially (he cashed in his congressional pension to help fund the campaign). Even as a destitute invalid in his old age, however, Elliott kept his dignity and integrity intact.

The life story of Carl Elliott is full of humor and wry wisdom and explains how he made his way across a stage as big as America, influencing its politics and future, and then emerged, belatedly, as an unsung hero of the fight for civil rights and equality.

Carl Elliott Sr. was the author of five volumes of regional Alabama history, collectively titled Annals of Northwest Alabama. In 1990, he received the first John F. Kennedy Profile in Courage Award. Michael D'Orso is a journalist whose work includes 13 books, including Like Judgment Day: The Ruin and Redemption of a Town Called Rosewood.