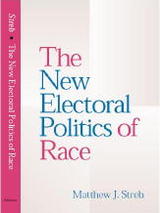 The New Electoral Politics of Race
by Matthew Streb
University of Alabama Press, 2002
Cloth: 978-0-8173-1149-0
This comprehensive study examines the disappearance of extreme prejudice and racial rhetoric in modern political campaigns and the alternate ways that race continues to be an abiding issue in the electoral process.

Historically, race has always been at the heart of American politics, and southern politics more specifically. Southern elections revolved almost entirely around racial issues during the 1950s and 1960s as debates raged over integration of schools, voting rights, and busing patterns. The election of George Wallace as governor of Alabama in 1962 underscored the electoral power of ruthless racial rhetoric, not only in Alabama, but throughout the South and the entire country. Almost 40 years later, segregation is no longer legal, tensions between blacks and whites have lessened, and the influx of large numbers of African Americans into the electorate has forced politicians to court black voters.

Matthew Streb finds, however, that although extreme racial rhetoric has disappeared from the modern campaign trail, voters are still polarized along racial lines. By comparing gubernatorial campaigns in four southern and three northern states-Alabama, Georgia, Arkansas, Virginia, Ohio, Iowa, and Massachusetts-the author examines how candidates use, or fail to use, race in their campaign strategies. He demonstrates that race indeed remains a significant factor in American elections, couched in alternative issues, such as affirmative action, profiling, and social welfare.

Streb's analysis of the appeal by politicians for the elite vote and the public vote reveals that class has replaced race as a definitive issue in American politics. This book will, therefore, be important not only to academic libraries and students and scholars of political science, southern history, and civil rights, but also to pollsters, campaign strategists, and state political party officials.
TABLE OF CONTENTS