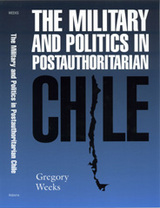 A thorough account of the struggle between civilian and military factions for political control of Chile after Pinochet's dictatorship.

Why have political leaders of developing and authoritarian nations run into so many obstacles as they attempt to establish civilian supremacy over armed forces in the democratization of their countries? This is the question Gregory Weeks poses in his study of Chile from 1990 onward. He explains how the Chilean military has maintained a high level of political influence in the tumultuous aftermath of dictatorial rule by Army General Augusto Pinochet, thus confounding a smooth transition to civilian authority.

Even after the reins of power were officially handed over in 1990, Pinochet continued as commander in chief of the army until 1998, when he took a lifetime seat in the Senate and led the military’s efforts to retain its legal and constitutional prerogatives while limiting civilian oversight of military affairs. This assertion of guardianship by the military has produced a political tug-of-war between it and civilian authorities the two contenders for political primacy in Chile. In addition to recounting the historical background of this situation, Weeks’s study examines where conflict between these two contenders has been most productive and accord has been highest. His findings suggest that formal contacts, conducted through formal institutions, have been the most conducive to civil supremacy and, therefore, the consolidation of democracy.

Based on interviews, government documents, military journals, newspapers, and other archival sources, The Military and Politics in Postauthoritarian Chile describes how presidents, military officers, members of Congress, and judges have interacted since the end of the military regime. With implications for conflict resolution studies, this book will be valuable for Chileanists and
policymakers and analysts of Latin American regimes, as well as academic libraries, military historians, social scientists, and students and scholars of Latin American history and politics.

Gregory Weeks is Assistant Professor of Political Science at the University of North Carolina at Charlotte.,

Gregory Weeks is Assistant Professor of Political Science at the University of North Carolina at Charlotte.