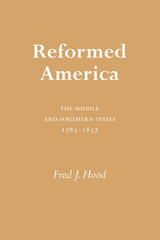 The success of the Reformed of the middle and southern states at shaping a distinctly American ideology of the relationship of religion and government was truly amazing. Unlike their New England counterparts, many of whom continued to enjoy some sort of establishment well into the nineteenth century, these Reformed entered the national experience with a backlog of experience in religious diversity and practical disestab­lishment, and even, in the South, as religious dissenters. They would have preferred a religious establishment that would have essentially recognized the validity of their understanding of Christianity. It was perhaps their own rigidity that caused them to fail in that attempt, especially in Virginia. But for such a rigid people, and they were rigid, they demonstrated a remarkable flexibility. When it became apparent that the American legal settlement would be one in which the state disen­gaged from the support of religion, the Reformed of the middle and southern states welcomed it and declared it to be the solution that would be most conducive to the spread and ultimate domination of Reformed Christianity. Unlike twentieth-century liberals, the Reformed inter­preted disestablishment as the legal and official recognition of the twin Reformation doctrines of the priesthood of all believers and the absolute and unquestioned authority of the Christian Scriptures. And, to a very large degree, it was their definition, rather than the thinking of Jefferson and Madison, that captured the imagination of the American people and became the dominant popular opinion in the land.

But perhaps of even greater significance, the Reformed of the middle and southern states forged an ideology that ultimately based American national prosperity on national adherence to Reformed Christianity. Under the tutelage of John Witherspoon and Samuel Stanhope Smith, the Reformed captured the Enlightenment and brought it into the ser­vice of Reformed Christianity, altering traditional Calvinism in the pro­cess. Witherspoon and Smith, declaring that the truth of the law of nations could be devised by observation and reason alone, propounded a doctrine of natural law and political science that substantially reinforced the Calvinistic doctrine of providence in an era of skepticism and en­lightenment. All history, they argued, proved beyond any reasonable doubt that those nations that adhered to the moral principles taught by Christianity had prospered and those that had taken a contrary route had fallen into ruin. The Reformed preachers of whatever denomina­tion picked up this message and proclaimed it throughout the land. The United States, if it were to prosper, was required to be a Christian nation.
AUTHOR BIOGRAPHY
Fred J. Hood is author of Kentucky: Its History and Heritage
REVIEWS
“Drawing upon nearly 3,000 printed sources, Hood argues that Reformed Protestants south of New England sponsored and attempted to implement a distinctive vision of the place of religion in the new American republic. . . . [An] erudite, clearly written book.”
—American Historical Review


“Hood has woven religious history into the social and political fabric of early-19th-century America; this is critical to an understanding of the nation’s response to the dynamics of social and cultural evolution in the early national period.…Hood has addressed a question that we are finding reasserting itself with renewed vigor, the proper role of religious belief in shaping national purpose.”
—History: Reviews of New Books