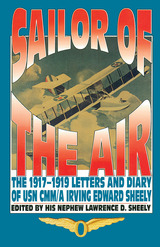 In the winter of 1917, with most of the world at war, twenty-three-year-old Irving Edward Sheely of Albany, New York, enlisted in Naval Aviation and began his training at Pensacola Naval Air Station. When Congress declared ware on Germany on April 6, 1917, the combined strength of aviation within the Navy and Marine Corps was 48 officers, 239 enlisted men, 54 airplanes, one airship, and one air station.

Lieutenant Kenneth Whiting immediately recruited seven volunteer officers and 122 volunteer enlisted men with orders to go directly to France as the First Aeronautical Detachment. By June, the first organized contingent of American forces arrived in the combat zone at St. Nazaire, France—woefully unprepared to take on the mighty submarine force of Imperial Germany. Among this small detachment was Landsman Machinist Mate Second Class Irving E. Sheely.
Trained by American and foreign officers, using both American and foreign aircraft, Sheely learned aviation and aviation combat at the heart of the action. He served as Observer/Gunlayer with Navy Lieutenant Kenneth MacLeish as pilot, and the two participated in some of the first antisubmarine air patrols in history, including a sea landing to rescue a downed crew. While at Clermont-Ferrand, Sheely developed an improved bombsight, for which he was praised by MacLeish. Following the Armistice, Sheely participated in the closing of the Navy base at Eastleigh, England, and returned to the United States in November 1918.
Utilizing Sheely’s correspondence and meticulous diary spanning 19 months of training and service—mostly on foreign soil and in foreign aircraft—this book presents an unusual first person account of the wartime experience of naval aviation in World War I. Sheely’s letters and diary describe the many deprivations and inadequacies of the aviation program and show clearly the sacrifices made by the officers and enlisted men. He supplied for himself items, such as helmet and goggles, that later servicemen would expect the military to issue. In addition to wartime description, the letters reveal the young man’s concern for his family and his interest in home, so a very human story emerges.