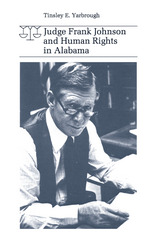 Judge Frank M. Johnson, Jr., Chief Judge of the United States District Court for the Middle District of Alabama until his elevation to the Court of Appeals for the Fifth Circuit in 1979, was perhaps President Dwight D. Eisenhower’s most significant appointment to a lower court. His selection to the bench in 1955 followed by only a few months the Supreme Court’s historic decision in Brown vs. Board of Education.

During Judge Johnson’s tenure, his court invalidated segregation and other forms of racial discrimination in Alabama’s transportation facilities, voter registration processes, school and colleges, administrative agencies, system of jury selection, prisons, mental institutions, political parties, and government grant programs. In fact, most of the state’s major racial crises were resolved in his courtroom. However, his impact on human rights policy in Alabama was not confined to a racial context. Among other significant developments, the Middle District Court ordered reapportionment of the state’s governing bodies and invalidated its grossly inequitable property tax systems.
Judge Johnson’s decisions made him one of the most widely respected and controversial trial judges in the country. Until recently, however, his name was anathema to many white Alabamians, and he and his family were subject to ostracism, threats, violence, and verbal abuse.
Yarbrough examines Judge Johnson’s life through the end of the Wallace era and the Judge’s appointment to the Fifth Circuit Court. More broadly, the book is a history of modern human rights reform in Alabama, cast in the biographical idiom. For, in a real sense, the history of the reform and of Judge Johnson’s judicial career have been synonymous.