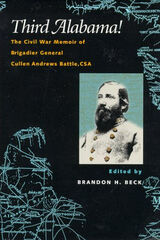 This memoir is a dramatic, intelligent first-person account of an Alabama regiment central to the Confederate campaign, written by its commander.


From Seven Pines to Sharpsburg and Chancellorsville to Spotsylvania, the Third Alabama Regiment played a key role in the Civil War. One of the first infantry units from the Deep South to make the journey to Virginia in 1861, the Third Alabama was the first to cross the Potomac into Maryland and to enter the streets of Gettysburg in 1863.

As the regiment’s leader and one of General Robert E. Lee’s brigade commanders, General Cullen Andrews Battle witnessed the extent of the many triumphs and sufferings of the Army of Northern Virginia. Trained as a journalist and lawyer, he records these events honestly and with compassion. Battle captures the courage of citizen soldiers fighting without prior military training, always paying tribute to the heroism of those under his command, while providing vivid accounts of some of the war’s bloodiest fights. He assesses Confederate mistakesparticularly at Seven Pines—and sheds light on the third Battle of Winchester, the only decisive defeat in which the regiment was involved.

Brandon Beck’s introductory notes provide a thorough review of Battle’s life and valuable biographical information on soldiers under his command as well as on other officers in the Army of Northern Virginia. A worthwhile addition to all Civil War librariespublic or private Third Alabama! offers an informative, dramatic reading of the wartime activities of one of the Confederacy’s bravest fighting units.

Brandon H. Beck is the Hugh D. McCormick Professor of Civil War History and Director of the Civil War Institute at Shenandoah University.