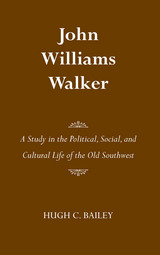 A biography of Alabama’s first Senator, this book is also the fascinating story of Southern frontier life as portrayed in contemporary letters and documents. When Madison County, Alabama, was still wilderness, Walker trekked across the mountains from Georgia with his bride, Matilda Pope, his slaves, and all his household possessions, to build a plantation near Huntsville. Here he began his extraordinary political career: member of the first territorial legislature; speaker of the house in the second; U.S. territorial judge; president of Alabama’s Constitutional Convention; and when statehood was won, first U.S. Senator.

Though his term in the Senate was cut short by illness, resignation, and death, in the four years he served, he met head-on the most controversial issues of his day—the Missouri Compromise, acquisition of Florida, and land relief legislation. It was in land relief that he made his most significant contribution, for he fathered the 1821 Land Law upon which new public-lands legislation for a decade thereafter was based. His own state wildly acclaimed him upon its passage; other frontier states had good reason to make him the public hero he became. But a year later, at 40, he was dead of tuberculosis.