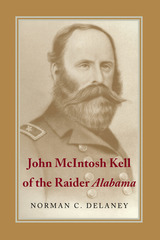 A vivid portrait of the man credited as a driving force behind the most successful of the Confederate raiders, the legendary C.S.S. Alabama.

John McIntosh Kell was an experienced, proven military man, a graduate of Annapolis, a veteran of the Mexican War and of Admiral Perry’s voyage to Japan. As a Confederate officer, Kell served first on the raider Sumter and then on the Alabama. At sea for only 22 months, the Alabama engaged nearly 300 northern merchant vessels, burning 55 of these transport ships along with their million-dollar cargoes.

Though First Lieutenant ("Luff") Kell was apparently content to let his captain, Raphael Semmes, take credit for their accomplishments, Semmes acknowledged that his successes were due largely to the energy and resourcefulness of his second in command. Life on the commerce cruisers was hard and tedious, and much of the responsibility for running the day-to-day operations, including the disciplining of a largely mercenary crew, rested on Kell, whose sense of duty and loyalty did not waver.

Norman C. Delaney bases his account of this remarkable naval officer’s experiences on the interviews Kell granted to news reporters during the 1880s and 1890s (previously neglected by historians) and his memoirs, published in 1900 as Recollections of a Naval Life. He supplements these materials with records from Kell’s earlier years, including letters, journals, diaries, and contemporary observations. First published in 1973 by The University of Alabama Press, this new edition of an award-winning biography will be welcomed by Civil War historians and enthusiasts around the world, naval institutions and museums, and general readers alike.

Norman C. Delaney is Professor of History at Del Mar College in Corpus Christi and author of Ghost Ship: The Confederate Raider Alabama.