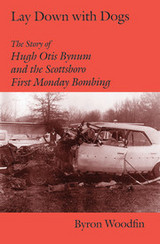 On the morning of December 4, 1972, the small north Alabama town of Scottsboro was shaken when a bomb ripped through the car of a prominent attorney. What followed were two years of unyielding
investigation resulting in the arrest of the town's wealthiest landowner. The trial that followed pitted Bill Baxley, a young, ambitious Alabama attorney general, against the state's most prominent lawyers.

Lay Down with Dogs is the story of a small southern town as it makes the transition from an agrarian hamlet to progressive New South suburbia. It is also the story of a twisted but powerful character, bent on revenge, whose motive was as enigmatic as the man himself. And it is the story of a young prosecutor, willing to risk a promising political future in order to pursue his sense of justice.

This book is not only a well-researched account but also a fascinating story of crime, the court, and the many characters brought together at one time and in one place to participate--for good or evil--in an unforgettable drama.