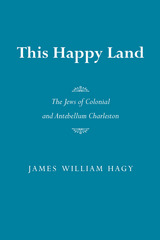 This Happy Land: The Jews of Colonial and Antebellum Charleston
by James William Hagy
University of Alabama Press, 1993
Cloth: 978-0-8173-0576-5
Paper: 978-0-8173-1288-6
This Happy Land charts the history of the Jewish community in Charleston, South Carolina, from the arrival of the first Jewish settlers in the 1690s until the outbreak of the Civil War in 1861. Charleston was the preeminent city of the South for many decades, and its Jewish community was the largest in North America from about the time of the American Revolution until around 1820. American Reform Judaism, one of the three major divisions of the faith, first appeared in Charleston in 1824 when the Reformed Society of Israelites was established. What happened among the Jews in Charleston thus affected the development of Judaism throughout America.
The Jews who lived in the city from the 17th century to 1861 are identified in Hagy’s comprehensive volume, which includes information on their places of origin, marriages, children, and deaths. From Hagy’s exhaustive research into published and archival sources, patterns emerged that allowed him to draw conclusions about the life of the people in the city and to develop both a social and religious history. Hagy shows that the Jews who lived in Charleston quickly adapted to Southern ways of life, including dueling and the ownership of slaves and plantations. Jewish residents gained full economic and political rights long before other communities in the western world, which led to their full participation in the town’s public, financial, intellectual, and social life. The also lived where they chose, followed the professions they wanted, and generally participated in the affairs of the city. Most viewed America as this “happy land” and Charleston as their “New Jerusalem.”
This book breaks new ground in the history of Jewish communities by providing such analyses as the origins of residents, the roles that women played in business, the causes of mortality, the antebellum Jewish family, the common aspects of life, and relations between Jews and African-Americans. It also provides a thorough analysis of the Reformed Society of Israelites that originated at Beth Elohim synagogue, and which became the first reform movement in America. The volume concludes with an appendix containing a list of all the known Jewish residents of Charleston for this period with selected biographical information.
AUTHOR BIOGRAPHY
James William Hagy is Professor of History at the College of Charleston.