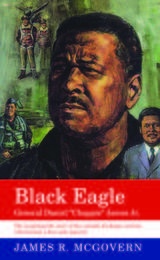 Born in Pensacola, Florida, the youngest of seventeen children in a relatively poor family, "Chappie" James (1920-1978) rose to attain the rank of four-star general-the highest rank of the peacetime American military. His parents had early on imbued him with personal and national pride and a singular drive that motivated him his whole life.

At Tuskegee Institute, James enrolled in the Army Air Corps unit formed to train black pilots. After combat service in World War II, James became the leader of a fighter group in the Korean War, during which he developed innovative tactics for providing close air support for advancing ground forces. He served with distinction in Vietnam and then became a public affairs officer in the Department of Defense. Between 1970 and 1974, James served as the Pentagon's chief spokesman to youth and civic organizations.

General James's importance transcends his unprecedented achievements as an African American in the military and his role as a spokesman for the patriotic community. He was an early and important proponent of black self-improvement through education, training, and the tireless pursuit of excellence. He became the very embodiment of the American dream.

First published in 1985 in hardcover, this reissue of Black Eagle in paperback makes the inspiring story of a notable Tuskegee airman available again.

James R. McGovern is Professor and Chairman of the Department of History at the University of West Florida in Pensacola and author of Anatomy of a Lynching: The Killing of Claude Neal.