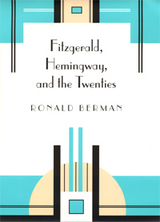 Both F. Scott Fitzgerald and Ernest Hemingway came into their own in the 1920s and did some of their best writing during that decade. In a series of interrelated essays, Ronald Berman considers an array of novels and short stories by both authors within the context of the decade's popular culture, philosophy, and intellectual history. As Berman shows, the thought of Fitzgerald and Hemingway went considerably past the limits of such labels as the Jazz Age or the Lost Generation.

Both Fitzgerald and Hemingway were avid readers, alive to the intellectual currents of their day, especially the contradictions and clashes of ideas and ideologies. Both writers, for example, were very much concerned with the problem of untenable belief—and also with the need to believe. In this light, Berman offers fresh readings of such works as Fitzgerald's The Great Gatsby, "Bernice Bobs Her Hair," and "The Diamond as Big as the Ritz" and Hemingway's "The Killers," A Farewell to Arms, and The Sun Also Rises. Berman invokes the thinking of a wide range of writers in his considerations of these texts, including William James, Alfred North Whitehead, Walter Lippman, and Edmund Wilson.

Berman's essays are driven and connected by a focused line of inquiry into Fitzgerald's and Hemingway's concerns with dogma both religious and secular, with new and old ideas of selfhood,and, particularly in the case of Hemingway, with the way we understand, explain, and transmit experience.

Ronald Berman is Professor of English at the University of California at San Diego and past chairman of the National Endowment for the Humanities. He is author of six books, including The Great Gatsby and Fitzgerald's World of Ideas and Fitzgerald-Wilson-Hemingway: Language and Experience.

TABLE OF CONTENTS
Contents
Acknowledgments
Introduction
1. Cultural Drift: A Context for Fiction
2. “Bernice Bobs Her Hair” and the Rules
3. “The Diamond” and the Declining West
4. 'The Great Gatsby' and the Good American Life
5. “The Killers” or the Way Things Really Are
6. Protestant, Catholic, Jew: 'The Sun Also Rises'
7. Order and Will in 'A Farewell to Arms'
8. Hemingway and Experience
9. Hemingway’s Questions
Notes
Select Bibliography
Index