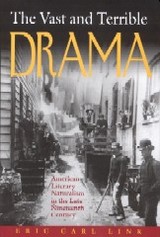 A broad treatment of the cultural, social, political, and literary under-pinnings of an entire period and movement in American letters

The Vast and Terrible Drama is a critical study of the context in which authors such as Oliver Wendell Holmes, Stephen Crane, Frank Norris, Theodore Dreiser, and Jack London created their most significant work. In 1896 Frank Norris wrote: "Terrible things must happen to the characters of the naturalistic tale. They must be twisted from the ordinary . . . and flung into the throes of a vast and terrible drama." There could be "no teacup tragedies here." This volume broadens our understanding of literary naturalism as a response to these and other aesthetic concerns of the 19th century.