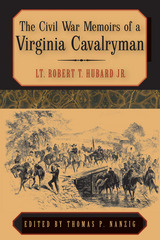 A witness who brings remarkable life and color to the Civil War in the East.
Robert Hubard was an enlisted man and officer of the 3rd Virginia Cavalry in the Army of Northern Virginia (CSA) from 1861 through 1865. He wrote his memoir during an extended convalescence spent at his father’s Virginia plantation after being wounded at the battle of Five Forks on April 1, 1865. Hubard served under such Confederate luminaries as Jeb Stuart, Fitz Lee, Wade Hampton, and Thomas L. Rosser. He and his unit fought at the battles of Antietam, on the Chambersburg Raid, in the Shenandoah Valley, at Fredericksburg, Kelly’s Ford, Chancellorsville, Gettysburg, Bristoe Station, and down into Virginia from the Wilderness to nearly the end of the war at Five Forks.
Hubard was like many of his class and station a son of privilege and may have felt that his service was an act of noblesse oblige. Unlike many of his contemporaries, however, he was a keen observer and a writer of unusual grace, clarity, humor, and intelligence. The editor has fleshed out his memoir by judicious use of Hubard’s own wartime letters, which not only fill in gaps but permit the reader to see developments in the writer’s thinking after
the passage of time. Because he was a participant in events of high drama and endured the quotidian life of a soldier, Hubard’s memoir should be of value to both scholars and avocational readers.

AUTHOR BIOGRAPHY
Thomas P. Nanzig is an editor with ProQuest in Ann Arbor, Michigan, and author of four other books, including 3rd Virginia Cavalry.
REVIEWS

“Hubard’s memoir offers insightful remarks about religion and tensions in the ranks, Southern honor, the problems of conscription, and Confederate depredations against its own civilians. However, the document’s strength is the military narrative, particularly the 1864 cavalry operations in central Virginia. There are few other memoir/letter collections from one of Jeb Stuart’s troopers.”—Peter S. Carmichael, author of Lee’s Young Artillerist: William R. J. Pegram