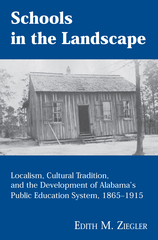 This richly researched and impressively argued work is a history of public schooling in Alabama in the half century following the Civil War. It engages with depth and sophistication Alabama’s social and cultural life in the period that can be characterized by the three “R”s: Reconstruction, redemption, and racism. Alabama was a mostly rural, relatively poor, and culturally conservative state, and its schools reflected the assumptions of that society.

AUTHOR BIOGRAPHY
Edith M. Ziegler is an Australian historian who is an adjunct lecturer in the School of Humanities at the University of New England in Australia. After a corporate career spent largely in an American multinational corporation she retired early to pursue her long-held interest in the social and cultural history of the United States. Dr. Ziegler lives in Sydney, Australia. Her first book Schools in the Landscape: Localism, Cultural Tradition and the Development of Alabama’s Public Education System, 1865-1915 was published by the University of Alabama Press in 2010.

TABLE OF CONTENTS
Contents
List of Illustrations
Acknowledgments
Introduction
1. Reconstruction and Its Reach, 1865–1901
2. Captains and Cohorts
3. Teachers and Teaching
4. The Schoolhouse—Inside and Out
5. Funding and Survival
6. The Progressive Urge
7. Special Days and Festivals, Rites and Rituals
8. Black Schools in a Dual System
9. 1915—A Watershed Year?
10. Conclusion: Then and Since
Notes
Bibliographical Essay
Index