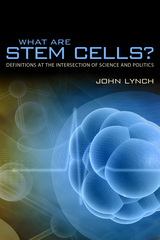 Normal0falsefalsefalseEN-USX-NONEX-NONEMicrosoftInternetExplorer4
In recent years political, religious, and scientific communities have engaged in an ethical debate regarding the development of and research on embryonic stem cells. Does the manipulation of embryonic stem cells destroy human life? Or do limitations imposed on stem cell research harm patients who might otherwise benefit?

John Lynch’s What Are Stem Cells? identifies the moral stalemate between the rights of the embryo and the rights of the patient and uses it as the framework for a larger discussion about the role of definitions as a key rhetorical strategy in the debate. In the case of stem cells, the controversy arises from the manner in which stem cells are defined--in particular, whether they are defined with an appeal to their original source or to their future application. Definitions such as these, Lynch argues, are far more than convenient expository references; they determine the realities of any given social discourse.

Lynch addresses definitions conceptually--their stability in the face of continual technological innovation, their versatility at the crossroads of scientific and public forums, and their translations and retranslations through politics. Most importantly, his work recognizes definitions as central to issues, not only within the topic of stem cell research, but also in all argumentation.
AUTHOR BIOGRAPHY
John Lynch is an assistant professor of communication at the University of Cincinnati.
TABLE OF CONTENTS

1. Science-BasedControversies and Idioms of Public Argument 1

2. Timely and Powerful: Defining Stem Cells through Appeals to Application 16

3. Abortion and the Embryo: Right-to-Life Arguments as a Source for Rhetorical Invention 44

5. Power, Potency, and Plasticity: Hierarchies of Stem Cells and Their Inherent Ambiguities 90

6. Stalemate and the Idioms of Science-Based Controversy: George W. Bush’s Manichean Idiom and Barack Obama’s Return to a Scientistic Idiom 118