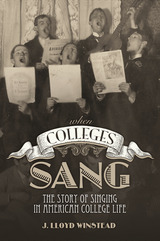 When Colleges Sang is an illustrated history of the rich culture of college singing from the earliest days of the American republic to the present.
Before fraternity songs, alma maters, and the rahs of college fight songs became commonplace, students sang. Students in the earliest American colleges created their own literary melodies that they shared with their classmates. As J. Lloyd Winstead documents in When Colleges Sang, college singing expanded in conjunction with the growth of the nation and the American higher education system.
While it was often simply an entertaining pastime, singing had other subtle and not-so-subtle effects. Singing indoctrinated students into the life of formal and informal student organizations as well as encouraged them to conform to college rituals and celebrations. University faculty used songs to reinforce the religious practices and ceremonial observances that their universities supported. Students used singing for more social purposes: students sang to praise their peer’s achievements (and underachievements), mock the faculty, and provide humor. In extreme circumstances, they sang to intimidate classmates and faculty, and to defy college authorities. Singing was, and is, an intrinsic part of campus culture.
When Colleges Sang explores the dynamics that inspired collegiate singing and the development of singing traditions from the earliest days of the American college. Winstead explores this tradition’s tenuous beginnings in the Puritan era and follows its progress into the present. Using historical documents provided by various universities, When Colleges Sang follows the unique applications and influences of song that persisted in various forms. This original and significant contribution to the literature of higher education sheds light on how college singing traditions have evolved through the generations and have continued to remain culturally relevant even today.
AUTHOR BIOGRAPHY
J. Lloyd Winstead is associate director of the Willson Center for Humanities and Arts at the University of Georgia.