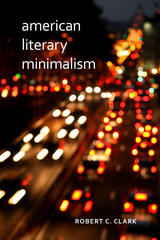 Although a handful of books and articles have been written about American literary Minimalism during the last forty years, the mode remains misunderstood. When in a 2011 interview in The Paris Review author Ann Beattie was asked how she felt about being “classed as a minimalist,” she began her answer: “none of us have ever known what that means.” Her response brings into focus the lack of agreement or clarity about the sources and definitions of literary Minimalism. Robert C. Clark’s American Literary Minimalism fills this significant gap.

Clark demonstrates that, despite assertions by many scholars to the contrary, the movement originated in the aesthetic programs of the Imagists and literary Impressionists active at the turn of the twentieth century. The genre reflects the philosophy that “form is thought,” and that style alone dictates whether a poem, story, or novel falls within the parameters of the tradition. The characteristics of Minimalist fiction are efficiency, frequent use of allusion, and implication through omission.

Organizing his analysis both chronologically and according to lines of influence, Clark offers a definition of the mode, describes its early stages, and then explores six works that reflect its core characteristics: Ernest Hemingway’s In Our Time; Raymond Carver’s Cathedral; Jay McInerney’s Bright Lights, Big City; Susan Minot’s Monkeys; Sandra Cisneros’s Caramelo; and Cormac McCarthy’s The Road. In his conclusion, Clark discusses the ongoing evolution of the category.
AUTHOR BIOGRAPHY
Robert C. Clark received his PhD in English from the University of Georgia. His recent publications include articles on Ernest Hemingway, Alice Dunbar-Nelson, María Cristina Mena, and Raymond Carver. His current research deals with transpacific minimalism, naturalism, and fiction of the twenty-first-century global financial crisis. He teaches at the University of West Alabama.