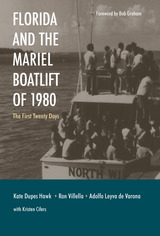 The 1980 Mariel Boatlift was a profound episode in twentieth-century American history, impacting not just Florida, but the entire country. During the first twenty days of the boatlift, with little support from the federal government, the state of Florida coordinated and responded to the sudden arrival in Key West of more than thirty thousand Cuban refugees, the first wave of immigrants who became known as “Marielitos.”

Kathleen Dupes Hawk, Ron Villella, Adolfo Leyva de Varona, and Kristen Cifers combine the insights of expert observers with the experiences of actual participants. The authors organize and present a wealth of primary sources, first-hand accounts, archival research, government records, and interviews with policy-makers, volunteers, and refugees that bring into focus the many far-reaching human, political, and cultural outcomes of the Mariel Boatlift that continue to influence Florida, the United States, and Cuba today.

Emerging from these key records and accounts is a grand narrative of high human drama. Castro’s haphazard and temporary opening of Cuba spurred many thousands of Cubans to depart in calamitously rushed, unprepared, and dangerous conditions. The book tells the stories of these Cuban citizens, most legitimately seeking political asylum but also including subversive agents, convicted criminals, and the mentally ill, who began arriving in the US beginning in April 1980. It also recounts how local and state agencies and private volunteers with few directives or resources were left to improvise ways to provide the Marielitos food, shelter, and security as well as transportation away from Key West.

The book provides a definitive account of the political, legal, and administrative twists on the local, state, and federal levels in response to the crisis as well as of the often-dysfunctional attempts at collaboration between governmental and private institutions. Vivid and readable, Florida and the Mariel Boatlift of 1980 presents the significant details that illuminate and humanize this complex humanitarian, political, and logistical crisis.
AUTHOR BIOGRAPHY
Kate Dupes Hawk has published articles on medical history and the Mariel Boatlift. She has developed three museums for the Florida National Guard Historical Foundation and was awarded the Commander’s Award for Civilian Service medal for her work on the Camp Blanding, Florida, Museum of World War II. Ron Villella retired as vice-president of Smith, Bryan & Myers, a lobbying firm in Tallahassee, Florida. He served as Florida Governor Bob Graham’s first director of administration. Adolfo Leyva de Varona is an associate professor at Florida State University-Panama in the Republic of Panama, where he teaches international relations and Latin American history. He is the author of Cuba: Assessing the Threat to U.S. Security and Propaganda and Reality: A Look at the U.S. Embargo against Castro's Cuba. Kristen Cifers is the executive editor and co-owner of Florida Media, Inc., where she has edited and published Florida Monthly Magazine, Florida Living, Florida Parks & Wildlife, Florida Fishing & Boating, and other periodicals.
TABLE OF CONTENTS
Contents
Foreword by Senator Bob Graham
Preface
Acknowledgments
Part I: Castro's Anti-American Obsession
1. The Origins of Castro and the Cuban Revolution
2. Cuba's International Conflicts and Communist Regime
3. A Shift in Revolutionary Target and Rapprochement
4. The Events that Led to the Mariel Boatlift
Part II: The First Days
5. Monday, April 21, 1980 - The Beginning of the End
6. Tuesday, April 22 - Decision Making Adrift
7. Wednesday, April 23 - Systems a "Go"
8. Thursday, April 24 - White House Complexity and Confusion
9. Friday, April 25 - Miami to Mariel
10. Saturday, April 26 - And the Boatlift is On
11. Sunday, April 27 - The Hand of God
12. Monday, April 28 - The Feds Are Coming, the Feds Are Coming
13. Tuesday, April 29 - A Momentary Honeymoon
14. Wednesday, April 30 - Agency Games Begin
15. Thursday, May 1 - The Sublime and the Rediculous
16. Friday, May 2 - Assessment, Assessment
17. Saturday, May 3 - Chaos to Confusion
18. Sunday, May 4 - One Potato, Two Potato
19. Monday, May 5 - All the Ships at Sea
20. Tuesday, May 6 - The Mixed Blessing
21. Wednesday, May 7 - Marines, Winn-Dixie, and Balogna
22. Thursday, May 8 - The Witching Hour
23. Friday, May 9 - Checkmate
24. Saturday, May 10 - Yet Another Try
25. May 1980 and Beyond - The End of the First Wave
Part III: Mariel - The Legacy
26. The Mariel Boatlift's Impacts
27. Indictments, Threats, and Retrospections
Epilogue
Postscript
Appendix A. List of People Involved
Appendix B. Organizational Abbreviations
Appendix C. Minutes of Meetings of ICAP with Wayne Smith and the Committee of 75
Notes
References
Index