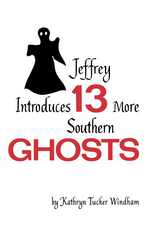 Jeffrey was the resident apparition in the Selma, Alabama, home of nationally-known folklorist Kathryn Tucker Windham and the inspiration for Windham’s best-selling collection of macabre tales that reveal two hundred years of Alabama’s ghostly secrets, Thirteen Alabama Ghosts and Jeffrey. One of the most popular books ever published in the state, generations of Alabama children and students have been thrilled and chilled by Windham’s spectral legends.

Opening this volume is “The Girl Nobody Knew.” One midsummer night in the genteel Kentucky mineral spring resort of Harrodsburg, a beautiful lady arrived at the town’s grand hotel. The belle danced late into the night with the town’s smitten gallants only to expire suddenly with the notes of the last quadrille. The spooked residents of Harrodsburg guard a grave you can see to this day. Readers then visit the world-famous Bell Witch of Robinson County, Tennessee. Jeffrey also makes his first trip to old New Orleans to reveal a revenant in residence on Royal Street before continuing his ghostly progress across Dixie.

This new edition returns Jeffrey Introduces Thirteen More Southern Ghosts to its original format in jacketed cloth full of original, black-and-white illustrations in a handsome keepsake edition perfect for gift-giving and for families, folklorists of all ages, and libraries.
AUTHOR BIOGRAPHY
Kathryn Tucker Windham grew up in Thomasville, Alabama, the youngest child in a large family of storytellers. For many years a Selma resident, Windham was a freelance writer, collected folklore, and photographed the changing scenes of her native South. A nationally recognized storyteller and a regular fixture on Alabama Public Radio, her commentaries were also featured on National Public Radio’s “All Things Considered.” Her other books include Thirteen Alabama Ghosts and Jeffrey, Jeffrey's Latest Thirteen: More Alabama Ghosts, Thirteen Georgia Ghosts and Jeffrey, Thirteen Mississippi Ghosts and Jeffrey, and Thirteen Tennessee Ghosts and Jeffrey.
TABLE OF CONTENTS


Foreword to the Original 1971 Edition

Chapter 1. The Girl Nobody Knew

Chapter 2. A Ghost Who Threw Things

Chapter 3. The Farmer Who Vanished

Chapter 4. Harpist of the Gulf

Chapter 6. A Glow in the Dungeon

Chapter 9. The Spirit of the Spindles

Chapter 10. The Ghost of the Barefoot Slave

Chapter 11. A Ghost Who Inspired Poetry

Afterword to the Commemorative Edition