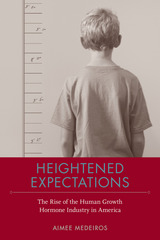 Heightened Expectations is a groundbreaking history that illuminates the foundations of the multibillion-dollar human growth hormone (HGH) industry. Drawing on medical and public health histories as well as on photography, film, music, prose, and other examples from popular culture, Aimee Medeiros tracks how the stigmatization of short stature in boys and growth hormone technology came together in the twentieth century.

This book documents how the rise of modern capitalism and efforts to protect those most vulnerable to its harmful effects contributed to the social stigmatization of short statured children. Short boys bore the brunt of this discrimination by the mid-twentieth century, as cultural notions of masculinity deemed smallness a troubling trait in need of remedy. These boys became targets of growth hormone treatment, a trend accelerated by the development of effective HGH therapy in the late 1950s.

With a revisionist twist, Medeiros argues that HGH therapy was not plagued by a limited number of sources of the hormone but rather a difficult-to-access supply during the 1960s and 1970s. The advent of synthetic HGH remedied this situation. Therapy was available, however, only to those who could afford it. Very few could, which made short stature once again a mark of the underprivileged class.

Today, small boys with dreams of being taller remain the key customer base of the legitimate arm of the HGH industry. As gender and economic class disparities in treatment continue, some medical experts have alluded to patients’ parents as culprits of this trend. This book sheds light on how medicine’s attempt to make up for perceived physical shortcomings has deep roots in American culture.

Of interest to historians and scholars of medicine, gender studies, and disability studies, Heightened Expectations also offers much to policy makers and those curious about where standards and therapies originate.
AUTHOR BIOGRAPHY
Aimee Medeiros is an assistant professor of the history of health sciences at the University of California, San Francisco.
TABLE OF CONTENTS
Contents
List of Figures
Acknowledgments
Introduction
1. Making Short Stature a Medical Matter
2. The Era of Early Growth Hormone Therapy in the United States
3. Short Stature as a Psychosocial Risk Factor in Need of an Effective Cure
4. Living the Promise of Human Growth Hormone Therapy
Epilogue: A Billion Dollar Industry
Coda
Notes
Selected Bibliography
Index