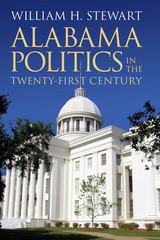 An expansive and accessible primer on Alabama state politics, past and present, which provides an in-depth appreciation and understanding of the twenty-second state’s distinctive political machinery

Why does Alabama rank so low on many of the indicators of quality of life? Why did some of the most dramatic developments in the civil rights revolution of the 1960s take place in Alabama? Why is it that a few interest groups seem to have the most political power in Alabama? William H. Stewart’s Alabama Politics in the Twenty-First Century explores these questions and more, illuminating many of the often misunderstood details of contemporary Alabama politics in this cohesive and comprehensive publication.

The Alabama state government, especially as a specimen of Deep South politics, is a topic of frequent discussion by its general public—second only to college football. However, there remains a surprising lack of literature focusing on the workings of the state’s bureaucracy in an extensive and systematic way. Bearing in mind the Yellowhammer State’s long and rich political history, Stewart concentrates on Alabama’s statecraft from the first decade of the twenty-first century through the November 2010 elections and considers what the widespread Republican victories mean for their constituents. He also studies several different themes prominent during the 2010 elections, including the growing number and influence of special interest groups, the respective polarization of whites and blacks into the Republican and Democratic parties, and the increasingly unwieldy state constitution.

This fascinating and revealing text provides a wealth of information about an extremely complex state government. Featuring detailed descriptions of important concepts and events presented in a thorough and intelligible manner, Alabama Politics in the Twenty-First Century is perfect for scholars, students, everyday Alabamians, or anyone who wants the inside scoop on the subtle inner workings of the Cotton State’s politics.
AUTHOR BIOGRAPHY
William H. Stewart is the author of The Alabama State Constitution and a coauthor of Alabama Government and Politics. He is a professor emeritus of political science at The University of Alabama and was presented the National Association of Secretaries of State Gold Medallion Award in July 2015 by Alabama Secretary of State John H. Merrill for “his service to the people of the state of Alabama.”

13. The Courts as Political Institutions

14. The Politics of Taxing and Spending