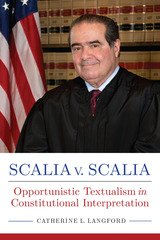 Scalia is seen as the standard bearer for textualism. But when textualism fails to support his ideological aims (as in cases that pertain to states’ rights or separation of powers), Scalia reverts to other forms of argumentation. Langford analyzes Scalia’s opinions in a clear area of law, the cruel and unusual punishment clause; a contested area of law, the free exercise and establishment cases; and a silent area of law, abortion. Through her analysis, Langford shows that Scalia uses rhetorical strategies beyond those of a textualist approach, concluding that Scalia is an opportunistic textualist and that textualism is as rhetorical as any other form of judicial interpretation.
AUTHOR BIOGRAPHY
Catherine L. Langford is an associate professor of communication studies at Texas Tech University.
TABLE OF CONTENTS
Contents
Acknowledgments
Introduction
1. Textualism as a Response to the “Living” Constitution
2. Textualism in Scalia’s Speeches and Extrajudicial Writings
3. Interpreting a Clear Clause: The Eighth Amendment’s Cruel and Unusual Punishments Clause
4. Interpreting Competing Clauses: Mediating Religion between the Establishment and Free Exercise Clauses
5. When the Constitution Is Silent: Rejecting the Right to an Abortion
Conclusion: Scalia’s Opportunistic Textualism
Notes
Bibliography
Index