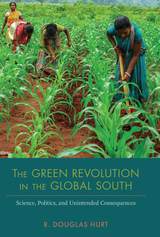 A synthesis of the agricultural history of the Green Revolution

The Green Revolution was devised to increase agricultural production worldwide, particularly in the developing world. Agriculturalists employed anhydrous ammonia and other fertilizing agents, mechanical tilling, hybridized seeds, pesticides, herbicides, and a multitude of other techniques to increase yields and feed a mushrooming human population that would otherwise suffer starvation as the world’s food supply dwindled.

In The Green Revolution in the Global South: Science, Politics, and Unintended Consequences, R. Douglas Hurt demonstrates that the Green Revolution did not turn out as neatly as scientists predicted. When its methods and products were imported to places like Indonesia and Nigeria, or even replicated indigenously, the result was a tumultuous impact on a society’s functioning. A range of factors—including cultural practices, ethnic and religious barriers, cost and availability of new technologies, climate, rainfall and aridity, soil quality, the scale of landholdings, political policies and opportunism, the rise of industrial farms, civil unrest, indigenous diseases, and corruption—entered into the Green Revolution calculus, producing a series of unintended consequences that varied from place to place. As the Green Revolution played out over time, these consequences rippled throughout societies, affecting environments, economies, political structures, and countless human lives.

Analyzing change over time, almost decade by decade, Hurt shows that the Green Revolution was driven by the state as well as science. Rather than acknowledge the vast problems with the Green Revolution or explore other models, Hurt argues, scientists and political leaders doubled down and repeated the same missteps in the name of humanity and food security. In tracing the permutations of modern science’s impact on international agricultural systems, Hurt documents how, beyond increasing yields, the Green Revolution affected social orders, politics, and lifestyles in every place its methods were applied—usually far more than once.
AUTHOR BIOGRAPHY
R. Douglas Hurt is professor of history at Purdue University. He is author of Agriculture and the Confederacy: Policy, Productivity, and Power in the Civil War South; The Big Empty: The Great Plains in the Twentieth Century; and The Great Plains during World War II. He is former editor of Agricultural History, former president of the Agricultural History Society, Fellow of the Agricultural History Society, and Affiliate Fellow of the Center for Great Plains Studies at the University of Nebraska.
TABLE OF CONTENTS
Contents
List of Figures
Foreword
Introduction
1: Latin America
2: South Asia
3: East and Southeast Asia
4: China
5: Sub-Saharan Africa
6: Green or Gene Revolution
7: Reflections
Notes
Selected Bibliography
Index