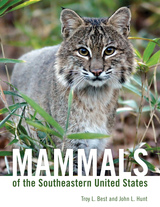 First comprehensive account of the mammals of the entire southeastern US

The southeastern United States is home to a remarkable and diverse mammalian fauna that is a significant part of the region’s rich natural heritage. Mammals of the Southeastern United States presents accounts of 137 species that currently or previously occurred in the Southeast. Although accessible and useful for the generalist, this book provides an up-to-date compilation of basic knowledge about native and nonnative mammals of the region that is suitable for students of all ages and for professional mammalogists and biologists alike.

This volume profiles common species like the eastern gray squirrel, the white-tailed deer, and the Virginia opossum, but also includes among its accounts many extant species, such as the jaguar and porcupine, that once occurred in the region; native species, like the Caribbean monk seal, that are now extinct; native species that have been extirpated, or wiped out, from all or part of the region, such as the red wolf, cougar, American bison, and elk; and many introduced species, including the Mexican mouse opossum, common squirrel monkey, and capybara.

Each species account includes full-color images of the animal, plates featuring at least three views of its skull, color distribution maps of its approximate geographic range in the Southeast and in North America, and an up-to-date synthesis of several aspects of its biology, including habitat, diet, predators, parasites, diseases, and behaviors. An introductory chapter on conservation summarizes the current status of mammalian populations in the region and provides insight into some of the threats mammals now encounter in the Southeast.
AUTHOR BIOGRAPHY
Troy L. Best is professor emeritus of biological sciences and curator emeritus of mammals at Auburn University. He is coauthor, with Michael J. Harvey and J. Scott Altenbach, of Bats of the United States and Canada and coauthor, with Julian L. Dusi, of Mammals of Alabama, a Gosse Nature Guide.

John L. Hunt is professor of biological sciences at the University of Arkansas at Monticello and coauthor of numerous peer-reviewed articles in such scientific journals as Oecologia, Southwestern Naturalist, Texas Journal of Science, Mammalian Species, and Journal of the Arkansas Academy of Science.

Introduction. Conservation Status of Mammals in the Southeastern United States

Appendix 1. Whales, Dolphins, and Porpoises in Coastal Waters of the Southeastern United States