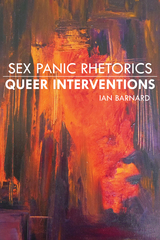 Analyzes the rhetoric of contemporary sex panics to expose how homophobia, heterosexism, and transphobia define public, political, and scholarly preoccupations with sexuality and gender

In Sex Panic Rhetorics, Queer Interventions, Ian Barnard makes the counter-intuitive argument that contemporary “sex panics” are undergirded by queerphobia, even when the panics in question don’t appear to have much to do with queerness. Barnard presents six case studies that treat a wide range of sex panic rhetorics around child molesters, sex trafficking, transgenderism, incest, queer kids, and pedagogy to demonstrate this argument. By using examples from academic scholarship, political discourse, and popular culture, including the Kevin Spacey scandal and the award-winning film Moonlight, Barnard shows how homophobia and transphobia continue to pervade contemporary Western culture.

Barnard is concerned not so much with looking at the overt homophobia and transphobia that are the more obvious objects of antihomophobic and antitransphobic critique. The author’s focus, rather, is on excavating the significant traces of these panics in a neoliberal culture that has supposedly demonstrated its civility by its embrace of diversity, renunciation of its homophobic past, and attentiveness to the transgender revolution that has swept popular media and political culture in the United States and elsewhere. During a time of increasing conservative backlashes against advancing LGBTQ rights and human rights discourses in general, this book shows why it is important to attend to the liberal covers for sex panics that are not too far removed from their rhetorically conservative cousins.
AUTHOR BIOGRAPHY
Ian Barnard (they/them/their) is professor of rhetoric and composition in the English department and director of LGBTQ studies at Chapman University. They are author of Upsetting Composition Commonplaces and Queer Race: Cultural Interventions in the Racial Politics of Queer Theory.

1. Introduction (Arriving at the Here and Now)

8. Conclusion (Toward a Queer Goodbye)