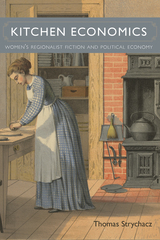 Readers of late nineteenth-century female American authors are familiar with plots, characters, and households that make a virtue of economizing. Scholars often interpret these scenarios in terms of a mythos of parsimony, frequently accompanied by a sort of elegiac republicanism whereby self-sufficiency and autonomy are put to the service of the greater good—a counterworld to the actual economic conditions of the period.

In Kitchen Economics: Women’s Regionalist Fiction and Political Economy, Thomas Strychacz takes a new approach to the question of how female regionalist fictions represent “the economic” by situating them within traditions of classical political economic thought. Offering case studies of key works by Sarah Orne Jewett, Mary Wilkins Freeman, Harriet Beecher Stowe, Rose Terry Cooke, and Alice Dunbar-Nelson, this study focuses on three complex cultural fables—the island commonwealth, stadialism (or stage theory), and feeding the body politic—which found formal expression in political economic thought, made their way into endless public debates about the economic turmoil of the late nineteenth century, and informed female authors. These works represent counterparts, not counterworlds, to modernity; and their characteristic stance is captured in the complex trope of feminaeconomica.

This approach ultimately leads us to reconsider what we mean by the term “economic,” for the emphasis of contemporary neoclassical economics on economic agents given over to infinite wants and complete self-interest has caused the “sufficiency” and “common good” models of female regionalist authors to be misinterpreted and misvalued. These fictions are nowhere more pertinent to modernity than in their alliance with today’s important alternative economic discourses.
AUTHOR BIOGRAPHY
Thomas Strychacz is May Treat Morrison Professor of English at Mills College. He is author of Modernism, Mass Culture, and Professionalism; Hemingway’s Theaters of Masculinity; and Dangerous Masculinities: Conrad, Hemingway, and Lawrence.
TABLE OF CONTENTS
Contents
Acknowledgments
Introduction: Female Regionalist Writing and Aeconomia
1. Plots of Polity in Late Nineteenth-Century US Popular Economic Discourses
2. Fabulist Plots of Polity in Freeman’s “The Revolt of ‘Mother’ ” and “A Mistaken Charity”
3. “Supposing an Island”: Political Economic Topographies in Stowe and Jewett
4. The Kitchen Economics of Green Island in Jewett’s The Country of the Pointed Firs
5. Talking Turkey: The Political Economy of Thanksgiving in Cooke and Stowe
6. Reconstructing the “Fruit Sublime” in Dunbar-Nelson’s “Mr. Baptiste”: Barter and the Political Economy of the Tropical Fruit Trade
7. Economics Gingerbread Style: Toward a Model Political Economy of the Kitchen
Notes
Works Cited
Index