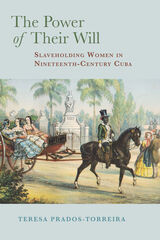 In the early nineteenth century, while abolitionism was rising and the slave trade was declining in the Atlantic world, Spain used this opportunity to massively expand plantation slavery in Cuba. Between 1501 and 1866, more than 778,000 Africans were torn from their homelands and brought to work for the Cuban slaveholding class.

An understudied aspect of Cuban slaveholding society is the role of the white Cuban slave mistress (amas). The Power of Their Will: Slaveholding Women in Nineteenth-Century Cuba illuminates the interaction of female slaveholders and the enslaved during this time. Teresa Prados-Torreira shows, despite the lack of political power in a highly patriarchal society, Cuban women as property owners were instrumental in supporting the long duration of slavery, whether by enforcing the disciplining of the enslaved in the domestic sphere or helping to create the illusion of slavery as a humane institution. Thousands of Creole slaveholding women relied on slaves to lead a comfortable life. Even the subsistence of many poor women depended on the income derived from the hiring out of their enslaved.

In this accessible cultural history, culled from government documents, fiction, newspaper articles, traveler’s accounts, women’s wills, and archival research, Prados-Torreira coalesces a valuable narrative out of the often paradoxical and conflicting stories of the human bonds between the female owner and the enslaved. Narrative chapters, enlivened by vignettes, describe the daily life of slave mistresses in the main cities of Havana and Santiago and other towns, workings of sugar mills and coffee plantations, how slaveholding women coping with slave rebellions and wartime during the Ten Years’ War, and how personal relationships could occasionally affect the balance of power.
AUTHOR BIOGRAPHY
Teresa Prados-Torreira is professor of American history at Columbia College Chicago. She is author of Mambisas: Rebel Women in Nineteenth-Century Cuba.