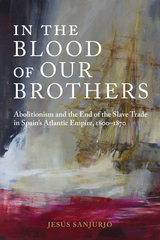 Throughout the nineteenth century, very few people in Spain campaigned to stop the slave trade and did even less to abolish slavery. Even when some supported abolition, the reasons that moved them were not always humanitarian, liberal, or egalitarian. How abolitionist ideas were received, shaped, and transformed during this period has been ripe for study. Jesús Sanjurjo’s In the Blood of Our Brothers: Abolitionism and the End of the Slave Trade in Spain’s Atlantic Empire, 1800–1870 provides a comprehensive theory of the history, the politics, and the economics of the persistence and growth of the slave trade in the Spanish empire even as other countries moved toward abolition.

Sanjurjo privileges the central role that British activists and diplomats played in advancing the abolitionist cause in Spain. In so doing, he brings to attention the complex and uneven development of abolitionist and antiabolitionist discourses in Spain’s public life, from the beginning of the nineteenth century to the end of the transatlantic trade. His delineation of the ideological and political tension between Spanish liberalism and imperialism is crucial to formulating a fuller explanation of the reasons for the failure of anti–slave trade initiatives from 1811 to the 1860s. Slave trade was tied to the notion of inviolable property rights, and slavery persisted and peaked following three successful liberal revolutions in Spain.