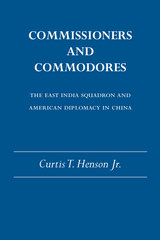 The American East India Squadron was created in 1835 by the Navy Department to extend a measure of authority to a remote corner of the globe. Americans in distant areas frequently had to cope without a naval presence, and the establishment of a permanent naval station abroad usually reflected the government’s assumption that American commercial or strategic interests were sufficiently vital to justify more than occasional visits. The appearance of a regular squadron did not necessarily imply that it would actually do anything, but rather that it would be available if the need arose.

In the 19th century the American naval presence on the China coast served three constituencies: merchants, missionaries, and diplomats. The merchants had been on the China coast for half a century, but the missionaries had arrived only a few years before the establishment of the East India Squadron. The diplomats did not arrive until a decade after the squadron’s formation.

Americans in the China trade showed minimal interest when the unsolicited warships appeared in 1819. The merchants were traditionally independent, and the Chinese system of trade at Canton made no allowance for foreign warships. Even after China had been forced into a treat relationship with the west, the navy made few positive contributions to the mercantile endeavor. The navy also had very little to offer the missionaries, who were few in number and whose movements were limited to areas that were open to merchants.

The relationship of the squadron to the diplomatic corps was much more significant. U.S. policy expressly linked the squadron and the diplomat, not always in clear and specific terms, but certainly in a manner distinct from that of the navy’s other constituents. Diplomatic relations between China and the west legalized the navy’s presence, opening the way for warships to move freely along the coast and within the open ports. Without warships at their disposal, the commissioners and ministers found themselves immobile or subject to uncertain private transportation. Navy vessels probably rendered their greatest service as floating legations.

Dr. Henson’s book traces the navy’s evolving position in China, and it stresses the relationship between the nay and the other American groups in China. He has paid particular emphasis to the commercial element, not only because the merchants were the first Americans on the China coast, but also because they continued to be the dominant American interest.
AUTHOR BIOGRAPHY
Curtis T. Henson, Jr. is assistant professor of history, Auburn University.