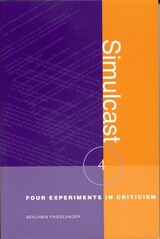 A provocative overview of avant-garde American poetry of the past 25 years that raises important questions about the practice of criticism.

Simulcast offers long overdue, highly opinionated, and penetrating examinations of a flourishing movement in American letters by one of its most perceptive practitioners. The four 'experiments' in literary criticism gathered in this volume vary in style and point of view. Taken together, they reassess the fundamental relationship between poetry and criticism.

"The Anti-Hegemony Project" is a satire, employing the rhetoric of journalism and the colloquial exchanges of online fan groups to analyze one of the earliest appearances of a poetry community on the World Wide Web: the "Poetics List" maintained at the State University of New York, Buffalo. "Poe’s Poetics and Selected Essays" is a collection of polemical essays on subjects ranging from modernism to language poetry. The third experiment, "The Literati of San Francisco," is a detailed portrait of the figures and ideas at the heart of an important literary scene a decade after language poetry’s inception. The final essay, "A Short History of Language Poetry," provides a less polemical, more sober and even-handed analysis of that movement from its origins to the present and its prospects for the future.

These critical interventions and essays are important studies of an evolving poetic field, but they also represent an evolution in criticism itself. Friedlander's unorthodox methodology is to create a critical text by rewriting prior examples of criticism, among them Jean Wahl's A Short History of Existentialism and Edgar Allan Poe's "Literati of New York City." The resulting critiques are themselves a kind of poetry. They explore the issues of style versus substance, artifice versus authenticity, and plausibility versus truth, while the shifts in perspective call into question the authority of any one critical account.

Benjamin Friedlander is Assistant Professor of English at the University of Maine and author of the books of poetry A Knot Is Not a Tangle and Time Rations.