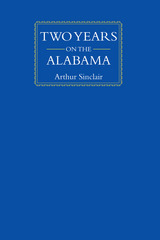 BUY
Two Years on the Alabama
by Arthur Sinclair
University of Alabama Press, 2003
Paper: 978-0-8173-5032-1
Confederate proclamation of nationhood was backed by an energetic and reasonably well equipped land defense.  Not so for its coastal and sea defenses; much of its hope of tipping the balance in its contention with the Union rested on international support, trade, and naval defense.  In search of a naval arm to counter Northern superiority on the seas, the South turned to foreign sources for a seaborne arm.  Confederate agents in England cagily used scarce gold, promises of cotton, and British sympathy to obtain the devastating naval weapons of speedy and deadly raiders.  Foremost among these was the Alabama, a screw steamer with full sail power, launched in May 1862.  In only twenty-two months of action, this ship engaged nearly 300 vessels and destroyed 55 Northern merchant ships worth millions of dollars.
AUTHOR BIOGRAPHY

Arthur Sinclair (May 1837- November 1925), the son and grandson of U.S. Navy officers. He served at sea under his father in the 1850s but had returned to civilian life by the time of the the 1860-61 secession crisis. Sinclair entered Southern naval service and served in CSS United States and in other ships during 1861, and on board the ironclad Virginia during her battle with USS Monitor on 9 March 1862.  Appointed to the rank of Acting Master in August 1862, he was an officer of CSS Alabama, under Captain Raphael Semmes, during her destructive commerce raiding career in 1862-64.